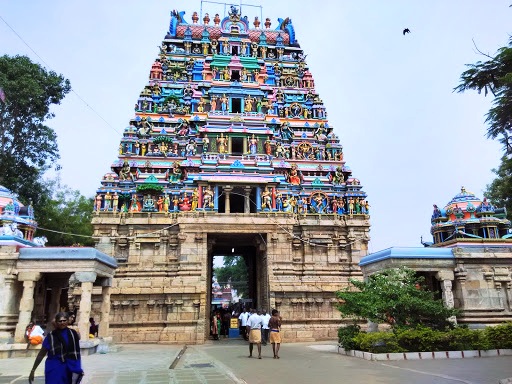 Bhavani Sangameshwarar Temple is an ancient one.  The confluence of three rivers Cauveri,Bhavani and Amirtha nathi meet at one place of the temple.  So the place of bhavani Eswarar is called as Sangameshwarar.  The place of bhavani is called as nayanmar’s songs as Thirunana.  The holy temple was praised by nayanmar Thirunanasampathar and Thiruppugal Arunagirinathar.  This places is known as parikar Thalam.  So in the south of the temple place of koodudurai the purokits (priests) performing poojas ie; parikara like nagadhosa, Sevvaidhosa, Marriage dhosa, Navagraha dhosa and other dhosas.  This place bhavani is situated in Erode District.

The nearest Railway station at bhavani is Erode which is away from 16 k.m. and the nearest Airport at Coimbatore is 100 k.m. away from bhavani and bus station of Bhavani is away from 1 K.m. from the temple.  Car, bus, auto facilities are there to reach the temple.  The foreigners of the tourists and north and south Indian peoples from Maharastra, Gujarat, Orissa, Kerala, Karnataka, Andhrapradesh who visited the place of bhavani temple and worshipped the lord Sangameshwarar and got blessings of the Lord.

Sangameswarar alayam known as Kooduthurai by locals, the temple of Lord Shiva in [Bhavani], Tamil Nadu, India. The temple was built at the confluence of Kaveri river,Bhavani river and ‘agaya gangai’, an invisible underground water source. The temple was priced in old tamil literatures Thirupugazh, Pillaithamizh by Thirugnanasambandar and Arunagiriyar. Sangameswarar alayam is a Tamil Nadu tourism spot and has a huge hall for social events, a beautiful river side garden, round boat ride, swim and bath area, and an elephant too.